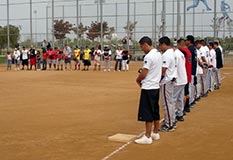 Guns & Hoses Softball hosts a series of slow-pitch softball tournaments that specifically cater to the "Public Safety" Community. We bring Police Officers, Firefighters, Corrections Officers, EMT's/Paramedics, Military and multiple state and federal agency teams together in an organized environment designed to promote competition and camaraderie. We offer "Upper", "Mid", and "Lower" (Div's I, II, & III) and a "Co-Ed" Division. So regardless of the level of play your team is currently competing, you will be pooled with teams of equal caliber from the start. For most of our tournaments, we follow modified SCMAF rules and USSSA bat guidelines. Division 1 has a USSSA style "strike pitching" format and Divisions 2 and 3 will feature "plate/mat" strike format. Top Shelf bats will be provided and used exclusively during our events to alleviate the allegations of any modified bats and level the proverbial playing field. Occasionally, we will host a unique tournament such as "Unlimited Home Runs", etc. Entry fees are $350 per team for our regular season events and $450 for the annual Palm Spring BLD 2 day weekend tournament and our T.O.C. season finale. 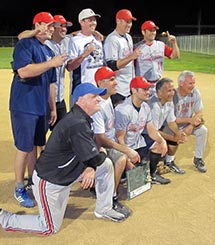 For every game played in a G & H Tournament, your team will earn points toward the overall "Points Chase Championship" for each Division. Every victory earns your team even more points and the points leaders at the end of the season will earn not only the "Points Title" bragging rights, but also the Points Champions Prize package. G & H points champs prizes for 2014 will be team "Top Shelf" Bats or Custom made leather fielders gloves to include embroidered players names, individual #'s, and team colors. The Top Shelf Bat prizes are awarded to Divisions I & II while the Custom made Team gloves are awarded to Division III.

Teams must consist of local, state, or federal level Police Officers, Firefighters, Corrections Officers, EMT's/Paramedics or Military personnel. Military players still qualify if "Retired" or if they hold an "Active or Inactive Reserve" ID Card. If any Military member is a "Wartime Veteran", to honor their service to our Nation, they will receive lifetime qualification into G & H Tournaments (must show military DD-214).

Teams participating in G & H Tournaments can use any combination of the aforementioned Public Safety employees to complete their rosters. Department, Agency, or Branch of Service issued photo ID is required and will be strictly enforced at all G & H events. 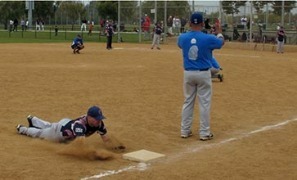 G & H also offers a Public Safety "Co-Ed" Division. Same rules will apply regarding qualifying personnel and ID cards for male players, but we will allow up to (3) female civilian players per team for Co-Ed. Typical Co-ed softball rules will be used during G & H events. If the Co-ed Division sparks enough interest, we will continue to host a Co-ed tourney every other, or every third month during our regular season and have a separate Co-Ed Division for our Tournament of Champions. It is up to the Co-ed community to show interest and actually participate to ensure this division continues.

Most of our tournaments are held in the cool coastal climate of Orange County, CA, in the cities of Fountain Valley, Huntington Beach, Costa Mesa and Tustin. Occasionally, we will venture to other facilities in the greater SoCal area such as Palm Springs, for our "Summer Slugfest" event. These one-day Tournaments typically start at 8 a.m., and if you find yourself in the Championship game, it usually has a 4 to 6 p.m. start time. All teams will be guaranteed a minimum of 3 games to include 2 round robin games followed by seeded, single elimination brackets. No matter what your record is during pool play, all teams will advance to the playoffs and still have a chance of winning it all!

The top place winners in each Division will receive a Team Plaque and a pre-determined prize package. The Official G & H team photographer will always be on site taking action shots and Team photos. At your request, your team photo can be emailed to you, free of charge. Every tournament also features a great selection of upbeat music pumping through the big speakers while you are battling it out on the ball-fields. 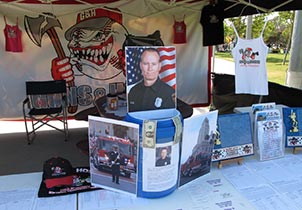 Some of our highlight tournaments are the "March Madness-St. Patty's Party" typically held on or near St. Patty's weekend in March, the "Drinko De Mayo" Tournament during the month of May, the "Summer Slugfest" 2 day "Unlimited Home Runs" event at "Big League Dreams" in Palm Springs, in July, "Hot August Days" in August, the "9-11 Memorial" Tournament every September, and our annual "Oktoberfest Tourney". The Oktoberfest Tournament is held in conjunction with the big Oktoberfest celebration at "Old World Village" in Huntington Beach. This is one you don't want to miss, as the "Oktoberfest" celebration includes live bands flown in from Germany, German beers, German food, Beer drinking competitions, Steins, Cigars, and Dancing (including the infamous Chicken dance!). For the single gents out there, this festival has an abundance of beautiful girls that the OC has to offer! 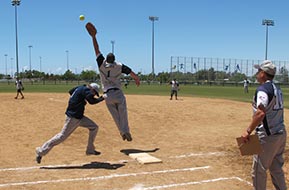 G & H tournaments are for the most part, situated near the beach scene. We encourage those who choose to enjoy the sites and scenery after a hard day of softball battles, to partake in the nightlife of Huntington Beach, Newport Beach, Costa Mesa and the surrounding area. North "OC" offers many great restaurants, pubs, and nightclubs! Two large and noteworthy SoCal malls are "Fashion Island" in Newport Beach and "South Coast Plaza" in Costa Mesa. Both are within 15 minutes of the fields. Of course SoCal is known for its great theme parks, such as Disneyland, Knotts Berry Farm, Universal Studios, Raging Waters, and many others, all within 15-45 minutes from the ball parks. The Huntington Beach Pier is of particular interest. Main St. (adjacent to the pier) has many shops, restaurants, and boutiques for the wives and girlfriends who enjoy the shopping experience. The pier is also a great place to sun bathe on the sand or take a dip in the Pacific. At night, the pier area comes alive, and the nightlife is as good as it gets!

If you are traveling from out of the area, Orange County (John Wayne) and Long Beach airports are about 15 minutes, while LAX is about 45 minutes away from the facilities G & H utilizes.

At times, G & H will have a Host Restaurant/Sports Pub that is family friendly and typically offers a "G & H discount" off of your total tab (food & booze), for your enjoyment in between games as well as the after-tourney party. So make sure to mention "Guns & Hoses" when settling your tab with your waitress.

G & H Tournament weekends are designed to provide the most equal softball match-ups between the public safety organizations and also create a total fun-filled weekend getaway for couples, families, or bachelors. If you are bringing the little ones, all of the ballparks that we use have playgrounds and snack-bars adjacent to the fields and the beach is only minutes away, should the families decide to go play in the waves while dad is battling on the ball field. G & H weekends are always action packed, on and off the field. So bring your "A" game, your sunscreen, and be ready for a great weekend!

The Guns & Hoses Softball tournament series culminates with the final "Best in the West – Tournament of Champions", to be held in November. Winners of each Division will have their Team name forever enshrined on the prestigious Guns & Hoses Perpetual Champions Trophy that is displayed throughout the season at each of our events. This final tournament of the year will establish which Public Safety Softball Team in each Division, is truly "The Best in the West!" 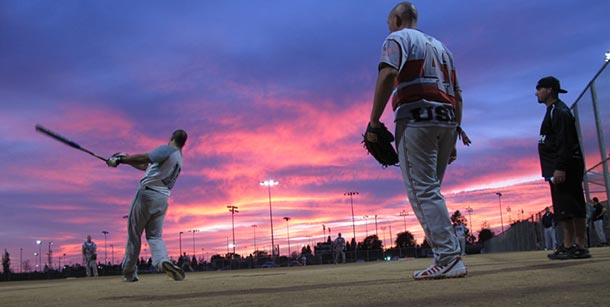