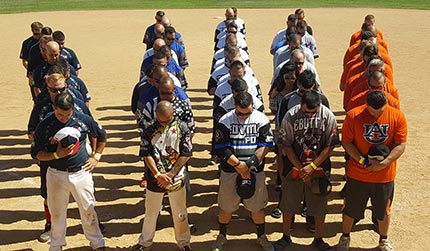 First up was the #5 seed Costa Mesa Fire avenging an earlier loss to #4 seed Local 47 15-12. The scrappy fire team had only 9 players in the field but still managed to seal the victory. Over on field #8, the #2 seed Covina PD squeaked out a very close win with a 7-6 score over the #3 seed Sting. Still with only 9 players, Costa mesa Fire gave the rogue Officers and #1 seed Unlawful Assembly a run for their money and made a close game of it. In the end, Unlawful Assembly secured the game with an 18-13 win. This set up the Championship game between Covina PD and Unlawful Assembly. The finals were set and it was a re-match of an earlier pool play game in which Unlawful Assembly bested Covina 21-7. The re-match and the opportunity to avenge that earlier defeat was precisely what Covina PD did, as their bats got super hot from the very first inning, and they didn’t look back. Unlawful Assembly hit the ball hard, but it was either right at a defensive player or a deep fly out. Final count was a 23-6 victory for the boys from Covina PD! Covina PD walked away with the 2019 9-11 Memorial title. Congratulations to Covina PD for battling all day long and claiming the Championship as their own.

All in all it was a great day of Public Safety Softball competition and camaraderie. The weather was unbeatable and DJ “Rugburn Supreme” was bumpin the jams while the boys were ballin-it-up on the diamonds!

The next G & H tournament will be the annual “Oktoberfest” and will be held at the Huntington Beach Sportsplex (upper half Fenced Fields) on Sunday Oct. 6th.

We appreciate and value your support and we look forward to seeing everyone next month at the “Oktoberfest” event.