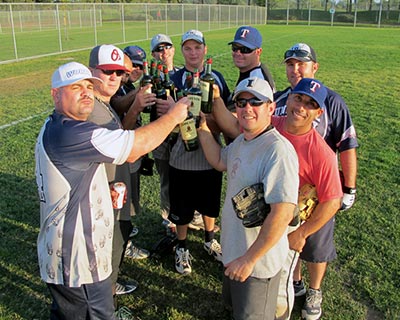 This year's season opener was another big hit with a great mix of teams from a wide variety of agencies coming from as far as the Mexican boarder, Ventura and Edwards AFB. There were the usual G & H suspect out in full force as well as a number of "new-to-the-scene" teams in each of the 3 divisions further contributing to the typical camaraderie and good times at Guns & Hoses. The 37 teams were divided into 3 separate divisions that were pooled by team caliber to promote competition. Gauging each of the team's playing level is always challenging at the beginning of each year, especially with so many new teams and older teams making major roster changes. Despite these challenges the games were still tight with plenty of close scores and unexpected upsets.

The fields were fresh and the weather couldn't have been any better. Because of the overwhelming demand for this tourney we were forced to add the 3 upper fields down the street at Huntington Beach Sport Complex for the division 3 round robin pool play games. All D1 and D2 round robin games and ALL playoff games battled it out at Fountain Valley's Mile Square Park. The usual Guns & Hoses atmosphere was in full swing with plenty of sunshine, Archie representing Worth, DJ Big "G" bumping the tunes and Optimized Living Wellness Center on hand to help ease those muscles into another season of balling.